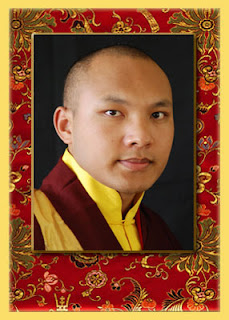 English and Chinese subtitles available. Many thanks to the AV folks at KTD!!

Posted by Lori Volpe at 6:26 PM No comments: 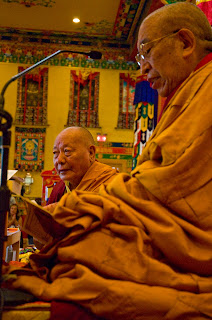 KTD has made available Khenchen Thrangu Rinpoche's teachings at Monlam, The Lives of the Karmapas. No need to rely on bloggers -- you can watch it yourself! Streaming on the internet, or download to your MP3 player.

Rinpoche taught 4 sessions. The first three have been posted in Tibetan and English. The fourth is "coming soon", as are Chinese translations of the teachings.
Video Teachings Click Here

Lama Karma Chodrak
Interview on the meaning, importance and history of the Kagyu Monlam Chenmo.
Click Here for Video 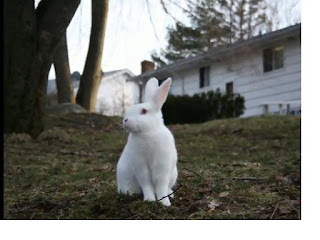 Many people wondered about the large white rabbit in the brown cardboard box who got the Akshobya empowerment from Thrangu Rinpoche during the third day of the North American Kagyu Monlam. Well, like most celebrities, the bunny has a single name like Cher and Madonna) and a website of his own.

So if you'd like to see Humble the Bunny and his amazing antics (including his meditation with his owner) you can check out the link:

The image of Humble going up and being blessed by the Akshobya vase and having saffron water drizzled on his little white head sure sticks with you. May all creatures have such good fortune in all their future lives!
Posted by Lori Volpe at 4:47 PM No comments: 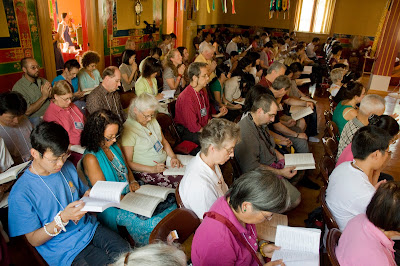 Xia Liu doesn't speak any Spanish. Elsa Gomez doesn't know a word of Chinese. But after five days at the North American Kagyu Monlam, the two women feel like they've known each other for years.

"Most of the time we understand each other, even without using words," says Xia Liu, who also goes by the American name Gloria. "Sometimes I wonder why that is, and I think, maybe we were sisters in a previous life!"

Although it's called the North American Kagyu Monlam, this week's event at Karma Triyana Dharmachakra has become a United Nations of sorts - participants have come from many states and several countries to be a part of the landmark event.

Sitting together at lunch on the final day of Monlam Saturday, Elsa and Gloria - and two of their new friends Marcella Elizabeth Castor Benitez and Emilia Urra - recounted the unusual set of circumstances that threw them together into what appears to be a fast and wonderful friendship.
Gloria, originally from Beijing, China (and now living in Florida) and Elsa, born and raised in Colombia, met each other the way a lot of people do these days - in cyberspace.

Both had an interest in Buddhism, and met the dharma before they met 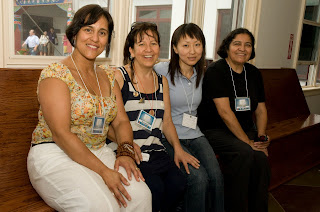 each other. They connected with KTD through its various websites and webgroups. Eventually, they both connected (several months apart) with KTD teacher Lama Karma Drodhul and joined his Mahamudra Ngondro support group on Google.

"I had asked about Ngondro on the KTD website, and they guided me to Lama Karma's webgroup," Elsa said through an interpreter. "We found out later that I had been to KTD to see Lama Karma for his Ngondro Retreat in January, and Gloria had been to the Ngondro retreat in April. So you could say we had a connection through Lama Karma."

Independently of each other, they made the decision to attend the historic first North American Kagyu Monlam after reading about it on the Internet. After making their travel plans, fate finally arranged a meeting between the two of them.

"Lama Karma had arranged for me to stay with a woman near KTD, and she got sick, so I didn't have a place to stay," Gloria said. Elsa also had been guided by Lama Karma to a rooming situation, and when it didn't work out, the two "met" on the Go 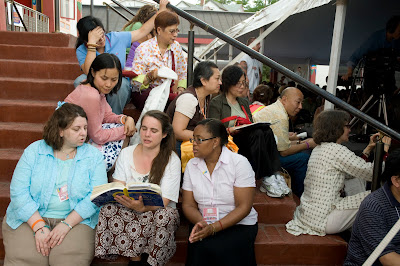 ogle webgroup and decided to try to room together when they arrived in the Woodstock area.

Elsa had arrived by plane from Colombia in the New York area and taken a bus to New York City's Port Authority bus terminal for her connection to Kingston, where they hoped to grab a cab to their rooming place. Not knowing New York and not knowing English, Elsa had a scary time on the airport shuttle bus.

"I didn't know that the bus was taking us through a tunnel and eventually was going to take me to my bus to Kingston," said Elsa. "I thought we weren't even at the Port Authority bus terminal, and I refused to get off the bus, saying "I want to go to Port Authority!"

Luckily, a transit policeman who spoke Spanish came to her aid, and Elsa was soon on her way to meet Gloria in Kingston.

From the moment they met, they felt a strong bond, Gloria said. "It's like we've known each other for a long time, and we've only just met," she said. "I have to admit I haven't been this happy for a while."

After arriving at Monlam, Gloria, who is fluent in English, scoured the KTD grounds looking for a Spanish translator to help Elsa with the Monlam puja. That's how they met Marcella, a Colombian woman who traveled to Monlam from Germany (where she attends university), and Emilia, who traveled all the way from Chile to the Monlam.

"I was in Lama Karma's Ngondro group too," Emilia said. "It's like Lama Karma was the connection for all of us!"

But what was even more interesting was that after having lunch with Elsa, Marcella suddenly realized they'd met before - when Marcella came to Elsa's candle shop in Bogota some years before. "I'd forgotten about it completely … until I suddenly recognized her that day at lunch!"

A highlight of the trip for Elsa and Gloria was an after-puja trip to KTD's Three-Year Retreat Center at Karme Ling.

"We went one evening after puja, and it was just like heaven to me," Elsa said. They came home greatly inspired by the beauty and blessing of the grounds at Karme Ling, and returned the next day for an overnight stay at the Karme Ling Lama House.

All who have met the women say their bond, although improbable because of the distance they've liv

ed from one another up until now, is very special. "It's wonderful to see how happy they are to have met one another," Marcella says.

Elsa agrees. "For me, Gloria is a surprise bos from which dakinis take treasures," she says, with Marcella interpreting. "She teaches me in every moment."

Although the Monlam is over, they're already making plans to attend the 2011 event in Vancouver.

"Elsa has promised to learn some English next year," says Gloria with a smile. "And I'll try to get better with my Spanish!"
Posted by Lori Volpe at 1:09 PM No comments:

Plan for North American Kagyu Monlam 2011: Next year in Vancouver!

At the conclusion of today's events, Lama Chodrak of the international Kagyu Monlam organizing committee said that the dates have been set for the next North American Kagyu Monlam.

The five-day event will be conducted from June 22 through 26, 2011, at Thrangu Monastery in Vancouver, Canada. The concluding day of the program is scheduled for June 26, His Holiness Karmapa's birthday.

To get an advance look at the home of next year's Monlam, check out: 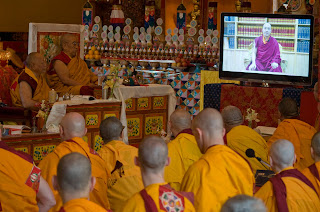 sn't look out of place in one's living room, but when it's in the front of a Buddhist shrine room, it certainly gets one's attention.

This morning's Monlam session began with the usual Sojong Vows and Sanskrit prayers, but when 9 a.m. came around, the television in the front of the Karma Triyana Dharmachakra shrine room came to life, it brought us a pleasant surprise: His Holiness the 17th Gyalwang Karmapa.

Although the setting was the same as His Holiness' recorded message played earlier this week - his library at Gyuto Monastery - there was a major difference: the speech was being given live, via webstream.

After greeting the participants (and particularly his own teacher, the Very Venerable Khenchen Thrangu Rinpoche), Karmapa apologized for not coming to the Monlam (he 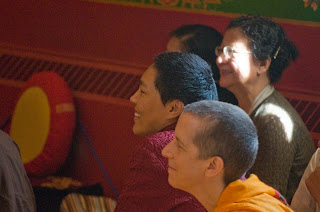 was unable to obtain a visa to travel to the United States), but said he was happy that his sister, Jestunma Ngodup Palzom, was able to attend. "I hope that through her presence, you will feel my affection for you," he said. "I'm also seeing you on the Internet [via webstreaming] and I see your faith and devotion. I'm praying along with you."

The speech was received warmly by participants, some of whom sat with hands folded in devotion as His Holiness spoke.

Lives of the Karmapas

Thrangu Rinpoche's talk today covered the activities of the 16th and 17th Karmapas.

"The 16th Karmapa's deeds were inconceivable," said Thrangu Rinpoche, speaking admiringly of his root guru. "All the Karmapas have great activity, but his was even more so."

Although Tibet has produced many great teachers, few were able to leave the "pure realm surrounded by snow mountains," as Tibet is called in aspiration prayers.

But because of circumstances, His Holiness was forced to leave Tibet, and while this might be seen by some as an unfortunate circumstance, Rinpoche said, it actually enabled him to spread the dharma throughout the entire world. 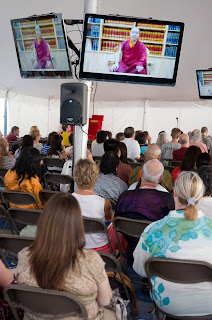 armapa expanded his seat in Sikkim and created seats around the world, including Karma Triyana Dharmachakra in the United States.

In considering monasteries such as KTD, Rinpoche said that some people think buildings are not important to the dharma and that practice and study are more important than creating structures. However, this view is not correct. While beings are transient in this world, changing over every generation, the buildings that house the dharma teachings will remain and help generation after generation, he said.

His other contribution has been the reviving and reforming the Kagyu Monlam. "He has turned it into a beautiful event that inspires people … it's a beautiful ornament that decorates the teachings of the Buddha. It transforms the minds of the sangha members who come to it … it's an incredible and wonderful dharma activity."
Posted by Lori Volpe at 7:46 PM No comments:

Thanks from the NAKM Newsroom

It's 10 p.m. on Day Five of the North American Kagyu Monlam, and the dining room at Karma Triyana Dharmachakra is almost silent - only the steady hum of the refrigeration units in the nearby kitchen underlies the quiet. But sitting at the dining room tables are the diligent denizens of what we're calling "The Kagyu Monlam Newsroom."

We're either diligent - or a little bit crazy. Sometimes it's hard to tell the difference.

Writing for the Chinese-language Ocean of Merit blog are Monica Liu and Pi-Chun Chen. They collect their notes in a combination of Chinese and English, and file their stories from their laptops. Representing the English-language North American Kagyu Monlam blog are Bill Skinner, Lori Volpe and Lama Kathy Wesley. All are combining their love of their languages and writing with affection for the Kagyu Monlam. We hope you've been enjoying the result - after all, we're staying up late for you!

We'll be filing our Day Five story in about an hour, but watch for three or four more stories from the NAKM blog over the next few days. We'll be publishing an interview with Jetsunma Ngodup Palzom (His Holiness Karmapa's sister), as well as feature stories about a woman's journey to ordination during Monlam, and an amazing (albeit improbable) international friendship that formed during the five days of the event. 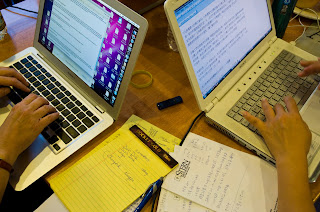 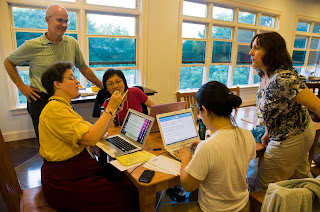